Vietnam consumer trends 2019.  With just under 94 million people and a gross domestic product (GDP) of US$240 billion Vietnam delivered a GDP per capita of US$2,560 in 2018.  Cimigo review which consumer trends in 2019 will continue to drive the phenomenal success of Vietnam’s economy.

In 2018 Vietnam racked up year another year of macro economic performance which is the envy of many. 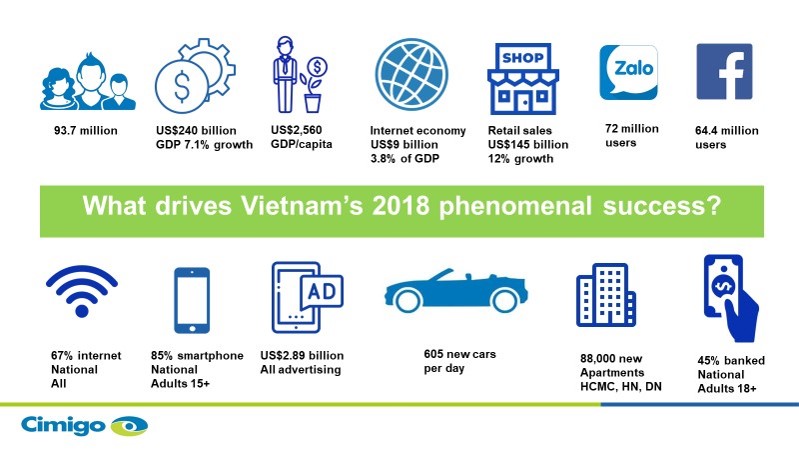 With just under 94 million people and a gross domestic product (GDP) of US$240 billion Vietnam delivered a GDP per capita of US$2,560 in 2018.  The internet economy delivered US$9 billion of that GDP at 3.8% of total GDP.  Retail sales grew at nearly 12% over the prior year to US$145 billion.

Advertising expenditure in Vietnam in 2018 across all media reached US$2.89 billion, online, social media and mobile advertising account for approximately 28% of this expenditure.

The internet penetration reached 67% amongst the total population.  Focusing on 15 year old plus population then smartphone (and hence ready internet access) reached 82% across urban and rural Vietnam in 2018.  Zalo is the leading installed application, with 72 million users In Vietnam.  Facebook has with just over 64 million users in Vietnam in 2018.

New car sales reached 605 per day nationally and 88,000 new apartments were sold across HCMC, Hanoi and Danang combined.  45% of the 18 year old plus population nationally now have a bank account.

This article explores the key consumer trends of 2019 in Vietnam that enable Vietnam’s success to continue.

Vietnam is both politically stable and nationalistic.  The nine key trends that further explain the continued economic success are discussed below.

This increases pressure on urban infrastructure and the air quality index takes a beating from the new construction and increased traffic.

Over a quarter-million new apartments were sold in the past 5 years across HCMC, Hanoi and Danang alone. As these new homes take shape, new families live in small spaces (typically between 35 and 45 square metres) without extended family.

The traditionally accepted practice has been for newlyweds to move into the husband’s parents’ home.  This is often part of the motivation to move into modern apartments, freeing new families from the overbearing mother in law.

Owning an apartment and not sharing the multi-generation home creates new demand for durables, furniture and fittings.  Along with the high-density living, come new convenience stores, the rapid rise of which has been discussed here.  Ultra convenience is the norm with an exponential rise in online shopping, delivery and ride services.

Living conditions change and purchase priorities shift. The long term implications for older dependents are as yet unchartered, but aged care will become a hot topic by 2036.

Free trade agreements abound for Vietnam, with more on route. Vietnam has rapidly inserted itself in the global trade network.  This is the second of nine Vietnam consumer trends 2019.

Already Vietnam is the most interconnected trading nation in the world.  To calculate this weformum.org used World Bank data to show the value of imports plus exports as a % of GDP.  Vietnam has the highest index at 200%. The next most interconnected was Thailand at 122%. India a mere 41% and surprisingly China was at 38%.

Vietnam’s trade within Asia surpassed 50% of all trade in 2018. 79% of foreign direct investment (FDI) into Vietnam was from within Asia, led by Japan, Korea, Singapore, Hong Kong and China.  This is the third of nine Vietnam consumer trends 2019.

US-China trade tensions in 2018 have helped push strong FDI investments in manufacturing. Many, particularly those in the textile industry, had already implemented plans to move manufacturing to Vietnam in preparation for the Trans-Pacific Partnership (TPP), they continued despite the TPP outcome.

Manufacturing accounts for 47% of foreign direct investments.  The attraction for manufacturing in Vietnam is strong, Vietnam has moved beyond the “1” in the ‘China plus 1’ approach.

More women work in Vietnam than anywhere else in the region

The high proportion of women working in Vietnam significantly boosts Vietnam’s economy.  This is the fourth of nine Vietnam consumer trends 2019. This desire to get ahead, work hard and the informal economy helps explain the rise in the middle class.

Vietnam has the highest % of the population who are working in the region.  88% of women (20-64 years) work in Vietnam versus 96% of men (20-64 years). As a point of comparison fewer than one in three women in India work. 40% of small-medium enterprises (SMEs) are owned by women in Vietnam. 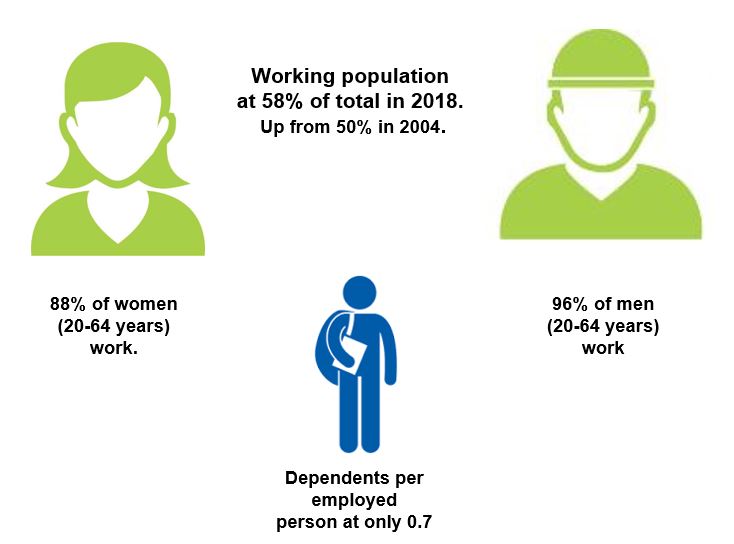 This high level of labour participation significantly lowers dependency ratios. Dependents per employed person are at only 0.7.  This gives GDP a huge boost.

Vietnam has an incredible entrepreneurial spirit

Many Vietnamese aspire to work for themselves, hence there were 131,275 new business registrations in 2018.  This is the fifth of nine Vietnam consumer trends 2019.

Urban working adults have on average 1.67 sources of income.  The desire for progression at a household level is no lower than it is at a national level.

As an example, independent retailers on Facebook make up the 2nd largest source of online sales (more than Lazada, less than Shopee shopping platforms).

The tipping point for the middle class has now passed, with 50% of all households, both urban and rural, having an income above US$400 per month. This is the sixth of nine Vietnam consumer trends 2019. Today there are 11,785,266 middle-class households.

The rise in the smartphone (that omnipresent sleeping companion), social media and instant access to services via the internet has dramatically shifted consumer purchase priorities.  This is the seventh of nine Vietnam consumer trends 2019.

The internet and the smartphone are democratising access to goods and services previously only available to a limited segment. Aggressive financing makes it easier to gain access to promotions, discounts and loans, making purchases more “affordable”.

The 2018 US$9 billion Vietnamese internet economy consists of four major areas. The largest is online travel at 39%, followed by online shopping at 31%, online gaming, media and advertising at 24% and ride hailing and delivery services at 6%.

Cimigo expects that online shopping values will surpass modern trade sales in 2028.  This is the eighth of nine Vietnam consumer trends 2019.

Despite the rise in convenience stores, modern trades’ contribution to retail sales has only moved from 15% in 2005 to 19% in 2018.

In contrast to other regional cities such as Bangkok, Cimigo does not expect modern retail to develop at the same scale nor the same format. Going forward, physical stores will need to provide exceptional experiences which can drive online transactions.

Do not assume that Vietnam will follow a similar trajectory, scale or even retail format as its Asian neighbours.  There is just too much opportunity for Vietnam to leapfrog the stages of development that those markets have experienced.

Keeping up with the Nguyen’s with consumer finance in Vietnam

Increasingly and alarmingly consumer finance growth has been highest in cash loans (at the highest levels of interest).   The desire to keep up with the Nguyen’s and buy on credit as opposed to longer-term saving and planning is indicative of shifting purchase priorities.

The speed of change today enables Vietnam to leapfrog the adoption curve of developed markets. We have already seen Vietnam jump stages of market development, that have evolved over decades overseas. 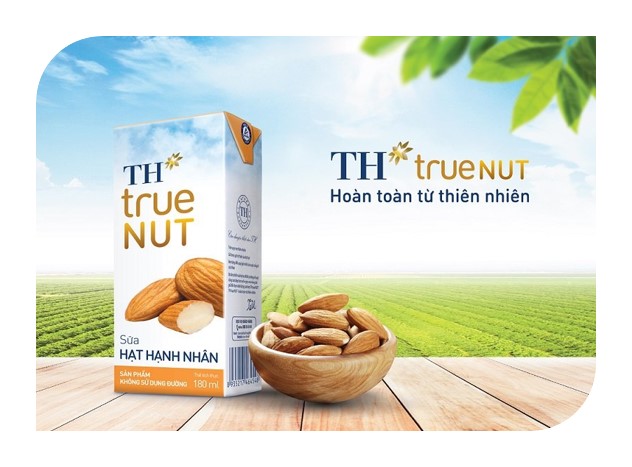 Vietnam just leapfrogged over all of these!

The nine key consumer trends in Vietnam for 2019.  These go a long way to explaining Vietnam’s continued economic success.