Cimigo’s annual perspective on the Vietnam consumer trends to watch out for in 2019. The Cimigo on Vietnam Consumer Trends 2019 presentation unveils the constraints on consumer goods growth in Vietnam and what drives the phenomenal success of Vietnam’s economy.

Another article will discuss the positive news, this article reviews the lacklustre growth in many consumer packaged goods sectors to understand the constraints facing consumer goods in Vietnam.

The share price drop that Vinamilk experienced in 2018 was a symptom of the milk category being in the doldrums and experiencing no year on year growth in value sales.  As the listed market leader with near 50% share, Vinamilk shares tumbled. This was in part impacted by issuing of bonus shares in September 2018. 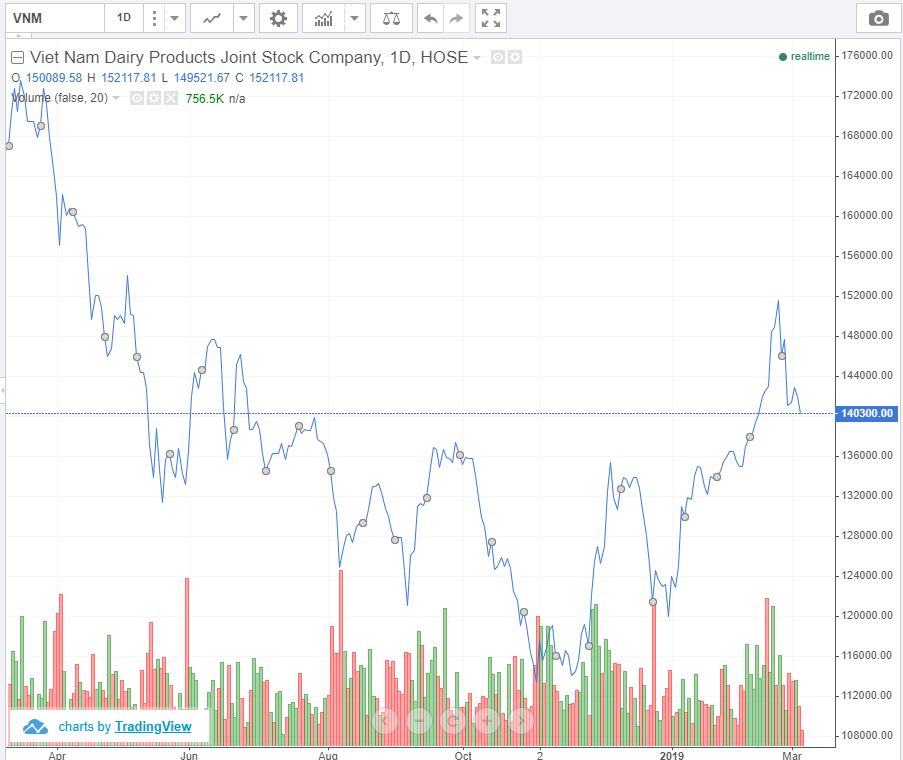 Most consumer goods categories have grown last year in the low single digit territory. Long gone are the heady days of double digit annual growth between 20 and 30%.  Whilst at a macro level Vietnam is experiencing phenomenal success, just why are many consumer goods experiencing lacklustre growth.

Decelerating birth rate, under 12s and pester power in Vietnam

Last year in 2018 there were 1,425,000 births. A significant increase in potential consumption for milk.  However, the conundrum this hides, is that this was the fifth year of decline in new births.  The demographic that drives much of mums purchase behaviour has commenced a slow decline and has been in a slow decline for the past 5 years.

New babies have a dramatic impact on household expenditure, what people buy and how they prioritise their expenditure. Ask any new parent how their cost of living has changed, it is a life changing moment for most families and of extreme interest to marketers from life insurance, to cars, to education to of course milk and many other consumer goods.

For a category like milk that has enjoyed nearly twenty years of double-digit growth, it is suddenly coming to a halt, because it is no longer selling into a growing demographic segment. Instead it is now selling into a declining segment and needs to be accounted for in long term planning.

The under 12 year old age group which accounts for over a third of milk consumption in Vietnam will now decline over the long term. With that is decreasing pester power, if you have ever been shopping with a child, the strength of pester power will be well known to you, it has dramatic impact on what Mum buys (and what she does not buy). The number of households with children in Vietnam is declining and will continue to do so. This has a huge impact on the milk category and many other consumer goods categories.

Rural the next growth frontier….population is in long term decline in Vietnam

Many consumer goods companies shave been pitching the rural consumer as their expansive route to growth.  It is a lie.  The rural population in Vietnam stopped growing in 2017 and started to decline in 2018.  Affluent households will continue to increase in number, yet the total number of rural households is declining.

Today 35% of Vietnam’s population is urban.  This will rise to 43% in 2036.  Rural Vietnam will never look the same again as it continues a slow long term gradual decline.  Consumer goods companies and especially Vinamilk, which in the company’s formative years had a mandate to provide accessible nutrition to every rural household can expect declining rates of return on rural product portfolios which see smaller lower priced packing options and expansive far reaching distribution efforts. Some of these efforts in pack formats, product portfolio and distribution systems may need to be gradually scaled back over the long term.

The flip side of the rural population declining, is off course positive for urban focused companies as the population becomes more concentrated and erratic agricultural incomes shift to more stable manufacturing sourced incomes.

Consumer naivety is over, brands face rapid claim wear out in Vietnam

The most shocking failure of players in Vietnam’s dairy milk category is to avert the cliff like drop in the chart below.  The chart shows the volume contribution by age group of liquid milk only. Not powder milk. Not yohurt. It is even more pronounced if we were to include 0-6 years and powdered milk formulas.

The missed opportunity of failing to produce compelling product propositions to extend the milk drinking age significantly beyond 12 is huge and contributes to the comparative low per capita consumption of dairy milk in Vietnam.

Worse still is that if consumers cease drinking milk, re-introducing it to their diet in later adult life, becomes far harder as they build an intolerance to the lactose enzyme.

Companies in the category have had 20 years of mostly double digit growth, but have been lazy in developing compelling propositions that extend milk consumption to an older audience.  They have failed to future proof their volumes, with adult consumption.

Brands have taken an evolutionary approach, using an out dated approach to continue to market fortification concepts, as opposed to  developing compelling new products. In these fortification concepts milk is a delivery system for fortified ingredients, convincing mums that these ingredients will ensure that their children will grow smart, tall or strong.

Mums once drank these fortified milks as children, they have heard it all far too often, the marketing paradigm is outdated, the over claims are dull, the market is saturated and the claims have worn thin. The milk product propositions are no longer compelling.

Media in Vietnam is full of stories regarding food safety.  This article Vietnamese killing themselves with dirty food in Tuoi Tre news presents a great summary of the prevailing food safety issues. Consumer trust in Vietnam has been shattered towards food and beverage safety.

This has led consumers to question what was previously, albeit somewhat naively, readily believed.

Consequentially today’s shopper in Vietnam has become more discerning and smarter.  The result has been a rapid propulsion of interest in provenance, origin, safety, naturalness and organic.

Vinamilk’s recent acquisition of Moc Chau milk, is further evidence of the trend towards demonstrating provenance.

Consumers previous shopping journey has been interrupted, as many now seek reassurance from imported (presumed to be safer) goods.  Mum as a shopper will seek reassurance especially for her children’s food.  Many such goods are now far more readily available through sellers on Facebook or online shopping platforms.

Vietnam at the end of 2018 had 3,177 modern trade grocery outlets. These are best described as outlets where you self serve in an air conditioned environment and settle your payment at a cash register.

It includes supermarkets, convenience stores and mini markets like Bach Hoa Xanh.  The latter accounted for 47% of the growth in outlet numbers, adding an impressive 218 outlets in 2018.

The chart below shows the rapid growth in outlets. Bear in mind that in 2005 there were a mere 182 modern trade grocery outlets in Vietnam.

Market entry and testing has become viable through modern and online channels delivering collectively 21% of retail grocery sales.  All without the sales and distribution investment required to service the traditional trade.

In short, they help expand the number of brands available to Vietnamese shoppers, this is particularly apparent in the beverage and milk categories.

The choice paradox is now overwhelmingly counter productive in Vietnam

There exists a intense fight for share of throat. The number of non-alcoholic beverage brands between 2004 and 2018 increased from 205 to 348.  All these brands are competing for the same shelf space and the same share of throat. Maintaining volume share, as Vinamilk did in 2018, in such as onslaught of choices is already difficult enough.

Looking at ready to drink packaged milk brands and variants, variants include flavours or type (sweetened or not) then there are 74 milk brand variants in 2018.  This still excludes all the different pack formats and sizes. The choice is overwhelming for shoppers in Vietnam.

It has been empirically proven that once you increase choices, within a category such at this, beyond 7, you will have a detrimental impact on sales.  Behavioural economists call this the choice paradox, too much choice reduces sales volumes.  It may well be time for the rationalising of product portfolios for many consumer goods companies.

Brands have forgotten how to innovate in Vietnam

Vietnam is seeing the emergence of store and online platform own brands. There are more modern retailers, shopping platforms and media channels. All this fragmentation requires more work for marketing and sales teams at consumer goods companies in Vietnam.

Previous generations of consumers in Vietnam valued long-term planning, to work hard before enjoying the fruits of their labour and they planned for their future.  Income was spent on gathering assets, possessions and accumulating savings. The definition of success was narrower and evolved around getting wealthy, collecting possessions and property with achievement through a high-level title or your own business.

Today’s consumers are far more likely than their predecessors to value enjoying life now, not delaying gratification and living in the moment.  Income is spent on experiences that create memories and they “make-do” with possessions. Success has a broader definition today including being happy, self fulfilment, recognition in social media and off course living comfortably.

Experiences and achievements have become more important than tangible goods in Vietnam. Cimigo believe this has shifted nearly 20% of household expenditure from general goods to new experiences since 2014.

This in part is reinforced by the social recognition granted courtesy of Vietnam’s 64 million Facebook users.  This may be a new café, a new bubble tea shop, a new foreign cuisine or more expensive travel and adventures.

The marketing budget pendulum has swung too far away from brand building efforts to tactical online drivel over the past four years. This leads to less brand building, low impact advertising placed in low quality media.  This low quality media sits at the end of a very long tail of online tripe. Here audience traffic is far more likely to be fraudulent bots than humans.

The online cost per thousand, race to the bottom, of very dark pit of despair continues.  Changes in advertising and media budget allocations have led consumer goods companies to chase after lower cost per thousand impressions (opportunities to see their advertisements). This is apparent in the increase of online and social media expenditure in marketing budgets. These budgets subject to massive fraud, ad fraud has been called the most lucrative yet low-risk form of crime in the world. More CMOs should learn from P&G’s experience.

The media industry is failing to tackle advertising technology fraud, although some marketers are slowly awakening from the middle they have created.  Further the tide has begun to turn on Facebook and Google’s people farming.

In summary the constraints to consumer goods growth in Vietnam