Production rises at the fastest pace since November 2018 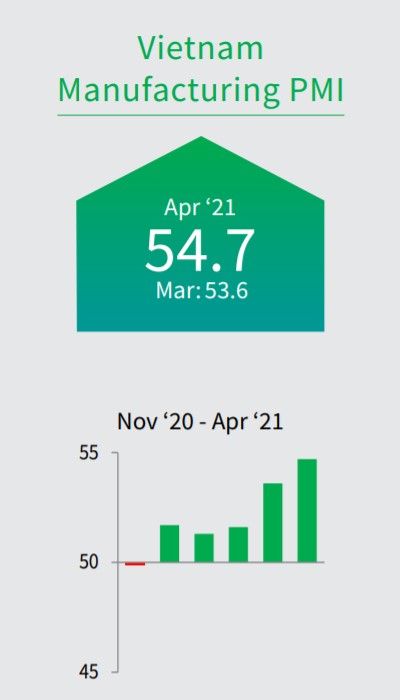 The pace of expansion in the Vietnamese manufacturing sector moved up a gear in April. Production and new orders rose at sharper rates, with firms responding by upping their rate of job creation and ramping up purchasing.

Input costs continued to rise sharply, feeding through to the fastest increase in selling prices in close to a decade. There were some signs, however, that supply-chain disruption had started to ease during the month.

The Vietnam Manufacturing Purchasing Managers’ Index™ (PMI®) rose for the third month running, posting 54.7 in April following a reading of 53.6 in March. The latest figure pointed to a marked improvement in operating conditions in the manufacturing sector, and one that was the strongest since November 2018.

The sector was boosted in April by signs that customers were willing to commit to larger orders than previously, given general improvements in demand and control over the COVID-19 pandemic.

Total new orders increased for the eighth month running, and at the fastest pace in close to two-and-a-half years. New export orders also continued to rise amid an improving international demand climate. Higher new orders fed through to a similarly-sized expansion of manufacturing output, with production also up at the fastest pace since November 2018. Consumer goods firms posted the sharpest rise in output of the three broad categories covered.

Firms were aided in their efforts to boost production by increasing workforce numbers. Staffing levels were expanded for the third month running, and to the greatest extent since December 2018. This increased capacity, however, was not sufficient to prevent a first rise in backlogs of work in 15 months due to the strength of new order growth.  As well as raising staffing levels, firms also posted a sharp and accelerated expansion of purchasing activity. Respondents indicated that the increase in input buying was both in response to higher new orders and as part of efforts to build reserves to support production growth in the months ahead.

Efforts to expand inventory holdings were generally successful in April, with both stocks of purchases and finished goods increasing. In both cases, the rate of accumulation was solid and faster than at the end of the first quarter. There were some signs that recent severe disruption to supply chains eased in April. While suppliers’ delivery times continued to lengthen, the latest deterioration in vendor performance was modest and the softest since last September. Where lead times did lengthen, there were ongoing reports of raw material shortages and global shipping difficulties.

Supply shortages and rising shipping costs continued to feed through to higher input prices. The rate of cost inflation remained substantial and was only slightly slower than that seen in March. In turn, firms raised their selling prices sharply, with the rate of inflation quickening to the fastest for close to a decade. Expectations that the COVID-19 pandemic will remain under control leading to higher demand, and the introduction of new product lines, supported ongoing confidence among firms regarding the 12-month outlook for production.